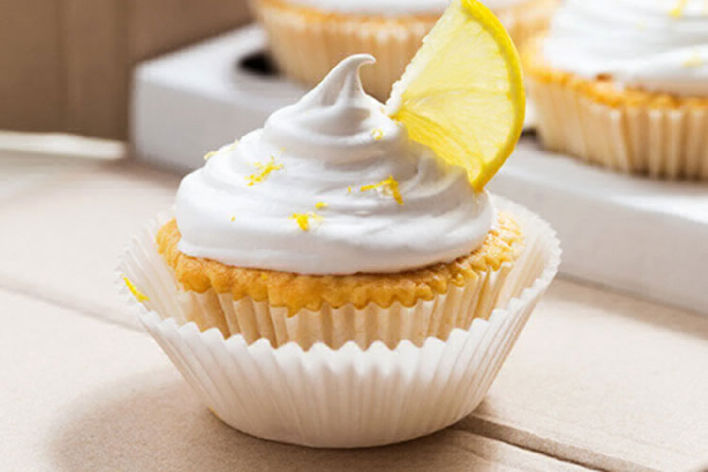 It is very fashionable to prepare Cupcakes to serve as snacks and special occasions, such as birthday celebrations and the like. This time we bring you the recipe for you to make some delicious Lemon Cupcakes, it is one of the most basic to make but you like them in general, and they are also an idea to start with since they are simple.

We start by turning the oven on to heat up to 180ºC (356ºF) with the heat both above and below, which is always best for preparing these recipes. Also place the molds for the cupcakes on a baking tray, to be able to pour the dough once it is finished.

Beat the eggs in a large bowl, add the flour and the medium over the yeast, if you sift it better, since some lumps and impurities always come. Add the zest of the skin of the lemons, being careful not to scratch the bitter white part and all its juice. Also add plain yogurt and sunflower oil. With the help of electric rods, stir at a slow speed so that all the ingredients mix properly.

You can substitute sunflower oil for unsalted butter, in fact it is the most common in Cupcake recipes, but in this specific case we have tried both possibilities and we liked the version with sunflower oil more. If you want to try it with butter, replace the oil with about 180 grams (6 oz) of unsalted butter.

Having the homogeneous, creamy and lump-free dough, you can already start filling the Cupcake molds, with a pastry bag or with a dispenser, which will allow you to pour the same amount in each of them. Put in the oven about twenty minutes until they are well done inside. It is important that they are gilded on the outside and well made on the inside, try with a toothpick that they are made on the inside. When you take them out let them cool to room temperature for a few minutes and remove them afterwards.

Then, or while the Cupcakes are baking, during that time we take the opportunity to prepare the buttercream with which we will decorate the pastries on top once they are baked and cooled. Ideally, make it based on butter and icing sugar, as we indicated on the home page in detail. There you can learn how to make a basic buttercream step by step, take a look. If you prefer you can do something simpler and even more complex if you have experience.

You can add a touch of lemon essence if you want to give it an extra lemon flavor, and even use a yellow or greenish-yellow dye in the preparation, to remind us more visually of a lemon. Decorate them with patience so that they are beautiful and appetizing, which will combine perfectly with how tasty they are.