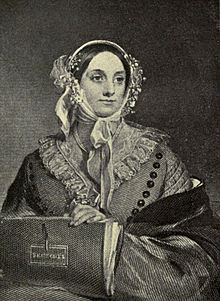 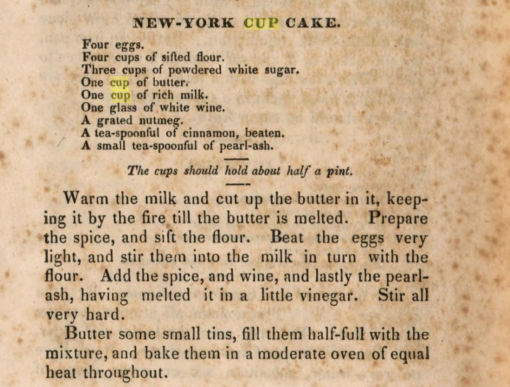 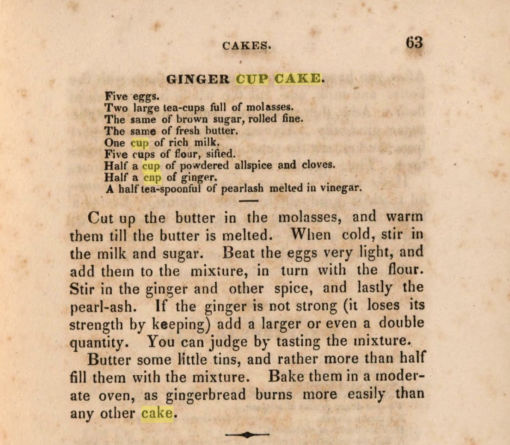 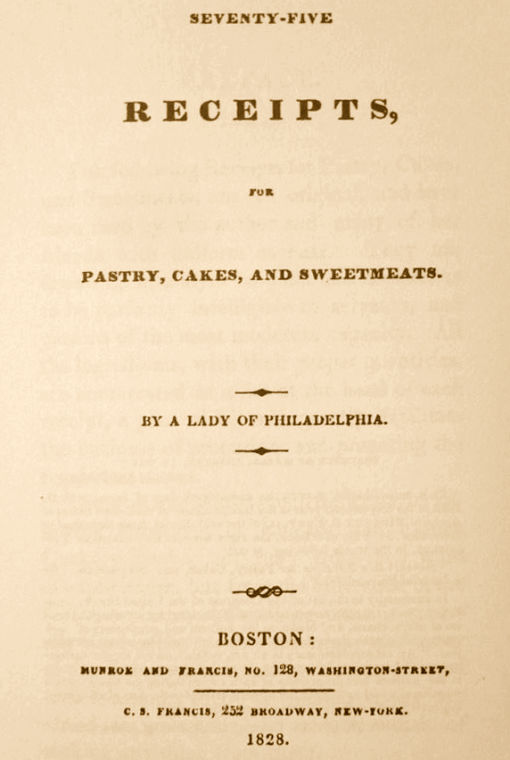 Its first mention can be traced back to the year 1796, when Amelia Simmons used this term for a "tartlet that is cooked in small cups" in her book American Cookery. The oldest documentation in which the term cupcakes already appears was in Eliza Leslie's (born on November 15, 1787 in Philadelphia, Pennsylvania) recipe book Seventy-five Recipes for Pastry, Cakes, and Sweetmeats (Seventy-five recipes for cakes, pies and sweets) published in 1828 .

Eliza Leslie (1787–1858), frequently referred to as Miss Leslie, was an American author of popular cookbooks during the nineteenth century. She also wrote household management books, etiquette books, novels, short stories and articles for magazines and newspapers.

In the early 1800s, there were two different uses for the term cup cake or cupcake. In previous centuries, before cupcake molds were widely available, cakes were often baked in individual ceramic cups or molds and named after the cups in which they were baked. This is the use of the name that is left, and the name "cupcake" is now given to any small round cake that is approximately the size of a cup of tea. While English fairy cakes vary in size more than American cupcakes, they are traditionally smaller and are rarely covered in elaborate frosting.

The other type of "cup cake" referred to a cake whose ingredients were measured by volume, using a standard-size cup, rather than being weighed. Recipes whose ingredients were measured using a standard size cup can also be baked in cups; However, they were most commonly baked in cans like cakes or breads. In later years, when the use of volume measurements became firmly established in home kitchens, these recipes became known as 1234 cakes or cake rooms, so named because they are made from four ingredients: one cup of butter, two cups of sugar, three cups of flour and four eggs. They are simple yellow cakes, somewhat less rich and less expensive than the sponge cake, due to the use of about half the butter and eggs compared to the sponge cake.

Cupcakes are generally baked in muffin tins, are usually made of metal, stoneware, silicone, with or without a non-stick surface, and generally have six or twelve "cups" or units. A standard-size cup is 3 inches (76 mm) in diameter and contains approximately 4 ounces (110 g), although they may vary and be larger or smaller and different in shape. Special molds or paper cups can be used to make these desserts.

They are already popular in practically all corners of the world, small delicacies, for adults and children, that attract attention for their careful presentation and delicious appearance.

A cup cake is a variant that gained popularity on many Internet cooking forums and email lists in the 2000s. The technique uses a cup as its cooking container and can be made in an oven. microwave oven. The recipe often takes less than five minutes to prepare. The cake is elevated by mixing vegetable oil (usually olive or sunflower oil) in a mixture of flour and other ingredients as the oil in the mixture heats up, creates air pockets in the mixture allowing the cake to rise quickly. This variant has been popularized since the early 21st century by the presence of numerous videos on websites and social media, each claiming to detail the fastest method of creating the finished product.

A "cake in a jar" is another way to make cupcakes. The baker uses a glass jar instead of muffin cups or cupcake liners.

A "butterfly cake" is a variant of the cupcake, 4 5 also called a fairy cake because of its fairy "wings". They can be made in any flavor. The top of the fairy tart is cut or carved with a spoon, and cut in half. Then the buttercream, whipped cream, or other sweet filling (for example, jam) is spread in the hole. Lastly, the two cut halves are glued together with the buttercream to resemble butterfly wings. The wings of the cake are often decorated using icing to form various patterns.

Ice cream made cupcakes can be made for special occasions such as baby showers, graduations, or holidays.

A "cake ball" is a single slice of the cake, round like a chocolate truffle, that is coated in chocolate. These are typically formed from crumbled tart mixed with ice cream, rather than being baked as a sphere.

A gourmet cupcake is one of the latest cupcake variants to emerge. Gourmet cupcakes are great filled cupcakes, based on a variety of flavors, such as tiramisu or cappuccino. In the 2010s, there was an outcrop of stores selling only gourmet cupcakes in large metropolitan areas.

As an alternative to a plate of individual tartlets, some bakers put standard cupcakes in a pattern and ice them to create a large design, such as a flower basket or turtle.

According to the site The Food Time Line, the first personal cakes that were marketed appeared after the First World War and soon became popular with housewives since their preparation was not complicated and they were very cheap.

However the origin of its name is still in dispute, on the one hand it is thought that before cupcake molds existed, housewives used the same cups where they mixed the ingredients to bake the cake, the name could come from from a cup and cake word game. Some cookbooks from that time mention how to bake cakes in small clay or tea cups, which are ideal for producing individual-sized cakes.

Another of the theories refers to the amount of ingredients used to make the dough (a cup of flour, a cup of butter, etc.), in fact the recipe for cupcakes is very similar to that used to make cakes. It was not until the 21st century that these desserts became fashionable in the United States receiving publicity from all kinds of celebrities, for example from the Sex and the City program where the Magnolia Bakery cupcake shop located in New York City became famous. Magnolia Bakery, the patisserie opened its first store in 1996 at the hands of founders Jennifer Appel and Allysa Torey, a homey and "neighborhood" patisserie with a vintage aesthetic and focusing on offering quality traditional American recipes, always handcrafted. In 2007, it passed into the hands of Steve and Tyra Abrams, who together with the pastry manager and co-owner Bobbie Lloyd consolidated and expanded the bakery's success.