Surprise your family or friends with this original recipe 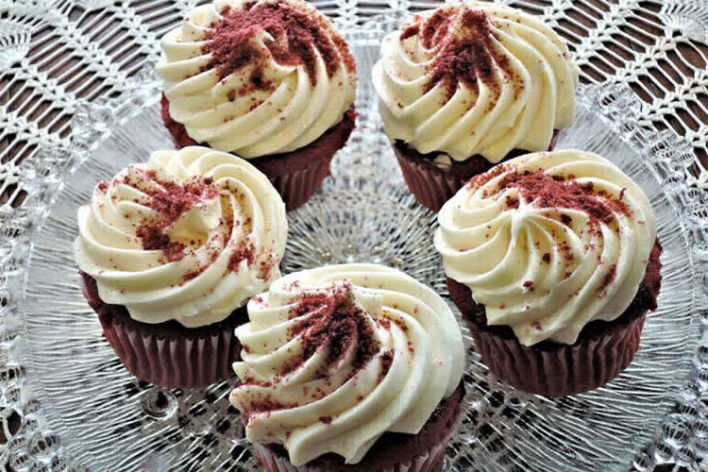 We start by sifting ingredients such as flour and unsweetened cocoa, in case they have lumps. When we have done it we remove both ingredients so that they mix well. You can sift them after mixing if you prefer. Meanwhile we are going to turn on the oven so that it warms up, so when we need it later we will not have to wait, we put it at 180ºC (356ºF), with the heat above and below.

The next step will be to place the butter, which should be at room temperature, in a bowl or the mixer glass, next to the sugar, and beat it as best as possible. It is highly recommended to use an automatic mixer or a kitchen robot, since in addition to streamlining the entire process, it helps to achieve a better result in terms of the final mixture, which is important because the dough of the Cupcakes will be better.

Without stopping to beat the previous ingredients, we will be adding to the glass both the egg, lightly beaten, and the spoon of vanilla essence and another of red coloring. Finally we incorporate into the flour and cocoa mixture and then the buttermilk, and leave a few minutes at medium speed so that everything is integrated forming a homogeneous mass. A little before finishing stirring with the blades, add a teaspoon of vinegar with baking soda.

When we see that the mixture forms a smooth cream and without lumps, we take a spoon of ice cream if we have, or else a normal spoon, to distribute the mass through the molds. It is important that all the capsules have the same amount approximately, about two thirds of their capacity, so that they bake and rise equally, which will facilitate their subsequent top decoration and thus we also ensure that they do not come out of the capsules when they are baked.

When we have all the capsules filled with the dough of the Cupcakes, we will put them in the oven and bake for approximately twenty minutes, checking a couple of minutes before finishing if they are well made inside, using a toothpick or a skewer. When they are ready, we take them out of the oven and let cool a few minutes outside before unmolding them to wait until they are very cold.

To finish the Red Velvet Cupcakes we must decorate them with the cream cheese icing, which we explain below how it is done. We must beat with the mixer or mixer about 300 (10 oz) grams of icing sugar along with about 65 (2½ oz)grams of unsalted butter. When both ingredients are well mixed, add 120 (4 oz)grams of cream cheese and continue beating until you get our cream to decorate, which should have a creamy and smooth texture. We decorate our Cupcakes and enjoy them.