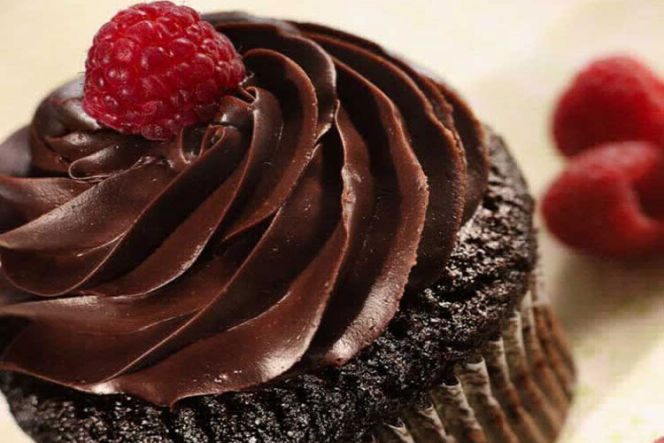 We show you the recipe to make Raspberry Cupcakes, very original and tasty, that we teach you how to do step by step so that you dare to make them at home at any time. It is a classic type of cupcake, it is delicious and you can make it with children, surely they love to make and eat them and you too, a great family memory.

We bring you another recipe for Cupcakes with fruits, one of those that we like so much at home. This time it is a recipe to make Raspberry Cupcakes, a recipe with a lot of flavor and that is ideal to make with a delicious and fresh raspberry of the time. Below we detail step by step how to prepare them in the simplest possible way.

The first steps to follow will be to prepare the baking pan, to which we will place the corresponding capsules, which we will leave ready to fill them with the dough that we make for the base of the Cupcakes. And it is also important to preheat the oven to 180ºC (356ºF) while we make the preparation.

Prepare all the necessary ingredients before starting, to have them ready and heavy and not have to be after doing it in between the preparation. The flour and yeast must also be sieved beforehand, so that you do not have to do it between all the steps and thus avoid lumps or impurities.

In the glass of the blender of rods we are going to add the butter and the sugar first, and we begin to stir well until both form a pasty mass. Then we will be throwing the eggs one by one, stirring each time we add one, which will make it easier to incorporate them well.

In a separate container, mix the flour, yeast and salt, and pour it into the mixer glass, along with the previous mixture. It is necessary to move several minutes at medium speed, so that the resulting mass does not have lumps and is as homogeneous as possible.

Once that dough is ready, add the vanilla and milk, stirring again. At the end we will be distributing the raspberries throughout the mass, trying not to break them and they are well distributed throughout it.

We are going to fill the paper capsules leaving a third of their free capacity, to allow the dough to rise as necessary. We put the tray in the oven for about 18-22 minutes, depending on the oven it may vary a little. Before removing we verify that the interior is well made, and that is how we let it cool outside and remove from the mold in about ten minutes.

To decorate the Cupcakes there are many possibilities, but with a little cream on top and a raspberry as a garnish or a bit of raspberry jam, we are left with some spectacular Raspberry Cupcakes. Another possibility is to make a light buttercream instead of using the whipped cream, whatever you like best. For those with a sweet tooth, they can also be made with chocolate, this mixture of chocolate and raspberry is also great.

And to enjoy this great recipe, which we hope will be very useful for your snacks and for any celebration.

Created with Mobirise - Find out