Surprise your friends and family with this original recipe 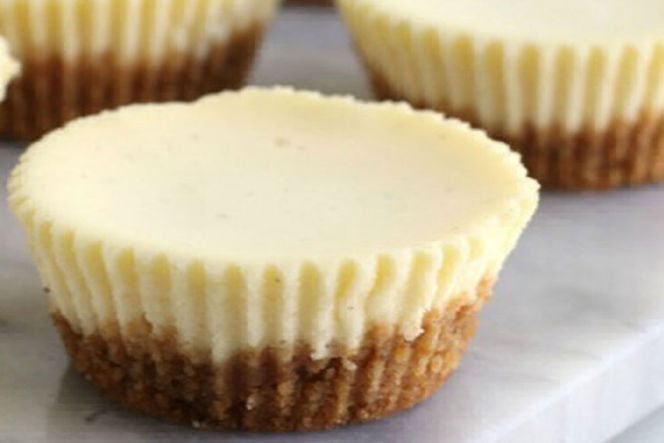 If you like cheesecake and cupcakes, this recipe will delight you, it is a mixture of the two. It is a little more complicated than a normal cupcake recipe but it is also easy to make, with this original recipe you will surprise your family and friends, it is great, and even though it is a little more complicated you can do it with children, so you will enjoy unforgettable afternoon with the family.

Preparation of the lemon biscuit base:

We crush the cookies until they become a fine powder.

We melt the butter in the microwave and add it to the cookie powder. Mix until the entire cookie is well impregnated and moist.

We fill the bases of our cupcakes. To do this, we place the capsules on our cupcake baking sheet and distribute the cookie mixture, pressing lightly until it is compact and smooth.

Bake our lemon biscuit bases for 5 minutes. After this time, remove from the oven and let cool at room temperature while preparing the cheesecake. We don't turn off the oven.

We lightly beat the cheese, on low speed, so that it softens and becomes creamier. Add the sugar and beat again until incorporated.

When preparing a cheesecake dough it is recommended to use the shovel instead of the whisk. The latter adds a lot of air to the dough and then during baking, cracks may appear on the surface of the cheesecake. If you do not have a shovel, you have to beat the mixture with the rods, on low speed, and only until the ingredients have been incorporated. Do not beat too much. It is also advisable to make all the mixes at the minimum possible speed.

We incorporate the vanilla paste and the lemon zest, and mix gently so that they are integrated. Add the eggs, one by one, making sure that they mix well with the dough and we end up incorporating the creme fraiche first and then the cornstarch. We should have a smooth, creamy and soft dough.

We fill the cupcake capsules, where we have previously made the cookie base.

If you are not going to put anything decorating you can put a little jam on the surface of each capsule filled with cheesecake and with a toothpick we mix to create a swirl effect on the surface of our cupcakes.

When they are ready, we should see that they are already consistent when touched, but the center is still soft (not liquid). We leave them in the oven, 10 minutes, with the door open and then let them cool completely at room temperature (it is fast). We keep them in the fridge for a minimum of 3 hours so that the dough finishes settling and taking shape.

Preparation of the cheese and cream frosting:

We mount the cream next to the icing sugar until it forms grooves and firm peaks, and has a stable consistency.

In a bowl, place the cream cheese and soften it with a spatula until it has a creamier texture. We add the whipped cream with the spatula, making enveloping movements until the two ingredients have completely fused. We obtain a cream with consistency and a very prominent cheese flavor.

We decorate our cupcakes with the nozzle that we like the most, once they are completely cold and have rested in the fridge.

We place the cut strawberry as a final topping.

Optionally, but I recommend adding a few strands of strawberry jam on top of the cheese frosting to give extra flavor to our cheesecake cupcakes.

How to make your own site - Get now